Are We Ready for Autonomous Driving?

In a rapidly changing digital environment, we heavily rely on high performance computing and machine learning to find the best possible solutions to help our everyday needs. Autonomous driving has cemented a new industry standard in transportation with endless future possibilities. Autonomous Vehicles (AV) is defined as a transportation system that drives without human assistance and or sometimes without a physical human being present. Vehicle can drive itself from a starting point to a predetermined destination while analyzing road conditions for the safest and most time efficient route to take. Self-driving cars use camera- based machine learning to envision radar and LIDAR based detection to perceive, understand and navigate endless driving scenarios. By 2025 the automotive AI market will be valued at $11 billion, a rise of 109% in AI based systems in new vehicles.

Developed by the Society of Automotive Engineering (SAE), these are the industry standards for autonomous driving that have been adopted by the U.S. Department of Transportation: 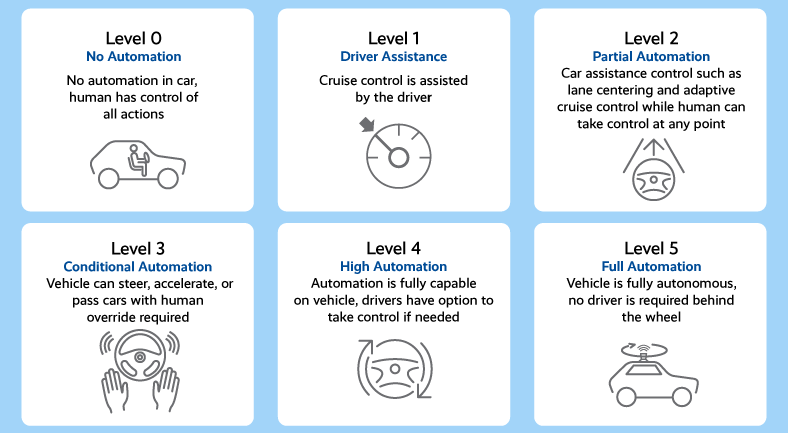 An advantage why autonomous driving has been in more in demand is because how safe the vehicle be on the road with an unmanned computer behind the wheel. Studies have shown that car accidents with more autonomous vehicles would decrease car accidents by 21% and would see a drop in car related deaths overall. Reduction of under the influenced, tired, and less stressed out drivers on the road will allow safer road conditions for all drivers. Autonomous vehicles can also provide mobility for the elderly and disabled so they can freely travel without any restrictions.

Autonomous has proven that it has the ability to optimize traffic flow in our daily commutes increasing productivity for oneself. Reduction of travel time, has increase productivity and better use of time for commuters traveling in vehicles. Since majority of autonomous vehicles on the road being electric powered, lower emissions and pollution levels will decrease due to more autonomous vehicles on the road.

NVIDIA DRIVE is a high performance computing platform that process data from cameras, radar and LIDAR technology to localize road surroundings to set the safest path for the automobile. To navigate through heavy congested traffic requires sensors that can detect obstacles, Gen 5 system relies on 28 camera sensors to generate more that 200 million pixels per frame 360-degrees around the car. Compared to a single high definition camera video captures 2 million pixels per data point. Gen 5 systems allow vehicles to react to high-traffic volume in real time and continually to improve how to manage new driving scenarios.

Using NVIDIA A10 Tensor Core GPU Ampere Architecture, AI computing has the power to compute ultra-complex self-driving DNNs while maintaining headroom for more advancements in for autonomous driving in the future. The A10 chipset allows a 70% improvement compared to the previous model in data processing performance allowing NVIDIA DRIVE program to be fully utilize in a variety of new and emerging autonomous driving technologies. To understand new road conditions, an autonomous trucking company deploy A10 GPU cards in each vehicle relying on TensorRT learning inference optimizer and runtime which delivers high-throughput for deep learning applications. This process will allow developers to create new obstacles for the autonomous vehicle to simulate hazardous road conditions so in real time there is no latency complications from the data center to the truck.

To showcase the power of autonomous driving, NVIDIA A100 GPU based super computer allowing deep neural network learning for Autopilot and self-driving capabilities using a cluster of 720 nodes of 8x NVIDIA A100 Tensor Core GPUs to perform at an industry leading 1.8 exaflops of performance. Leading to 20x higher performance over previous generations for their cluster. From the car to the data center, prediction models are created resulting in roughly 1 million 10- second clips recorded at 36 frames per second, totaling 1.5 petabytes of data. This information is ran through the deep neural network running millions of driving scenarios over and over again until it finds zero mistakes. Finally, the information is sent back to the vehicles for testing and to restart the testing process over again to find more issues that can arise in the future elementary deployment.

A public transportation company uses liquid cooling solution for an in vehicle mounted cooled server platform in autonomous buses, cars and taxi services for their fleet operation. Their goal was to decrease lag time from the super computer to the vehicle, so the AV can analyzing the most optimal route in real time. Company wanted a solution that allows for an unmanned new energy vehicle on the market with industrial grade liquid cooling, while ensuring product performance that saves energy. Powered to stay cool and silent at all times, the super computer in vehicles will analyze road conditions with no lag and disruption of vehicular motion.

Technology has come a long way from the very first Ford Model T to Tesla’s Model X auto pilot mode, autonomous driving has the advantages to produce safer road conditions to reduction of traffic congestion and pollution. NVIDIA has pave the way in GPU deep learning in autonomous driving by deploying A100 and A10 GPU cards to help simulating millions of driving scenarios to find the most optimal route with minimal hazardous road conditions. Liquid cooling solutions in autonomous vehicles can help reduce lag and latency to effectively predict driving patterns on the road. If you want to find more information about the many great benefits of autonomous driving, please contact one of our representatives to learn more about our services.
Previous Next