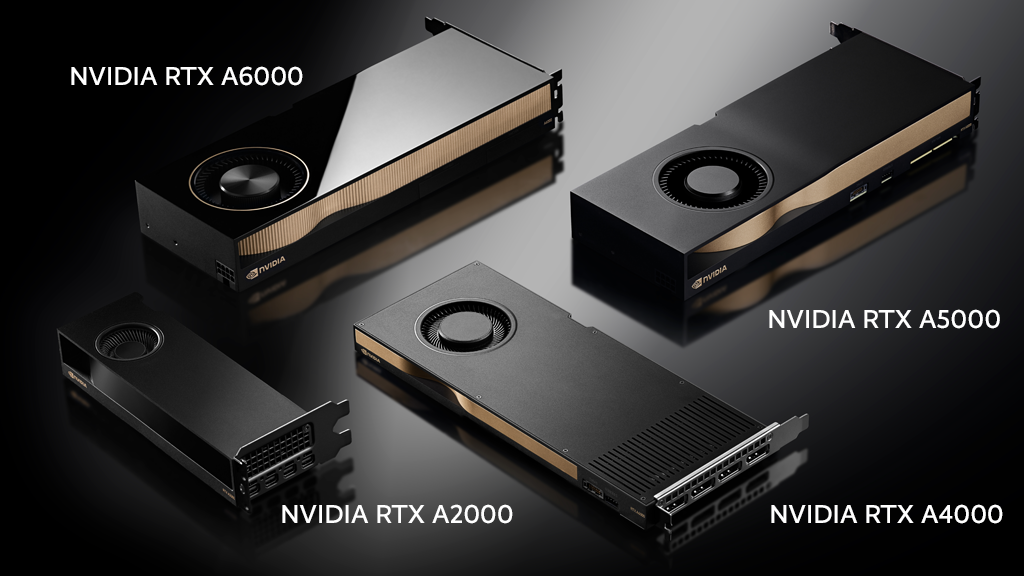 Which High Performance NVIDIA GPU Solution is Best For Your Workload?

The NVIDIA RTX Ampere architecture addresses the challenges of the professional workstation market by offering four graphic cards that deliver high-performance, real time ray tracing, accelerated AI, and advanced graphics rendering. All the GPUs are compatible with PCIe Gen 4. Each product comes in different memory configurations and offers different speeds. We have collated all the information you need to see what GPU is best suited to your workflow.

The NVIDIA RTX A2000 delivers accelerated AI, high-performance real-time ray tracing, and graphics rendering. It is a power efficient, low profile, dual slot design that connects to multiple monitors that have the capabilities to be shown on video walls and medical review stations.

One of the biggest advantages of this workstation graphics card is its use in small form factor workstations. This has contributed to the growing number of mobile workstations that we see customers purchasing due to the flexibility that this card offers.

The NVIDIA RTX A4000 features 48 RT Cores which speeds up photorealistic ray traced rendering up to 2X faster than the previous generation. It has 192 Tensor Cores which provides the required power for AI development and training workloads. The graphic card measures 241 mm in length, 112 mm in width, and features a single-slot cooling solution.

The GPU operates at a frequency of 735 MHz, which can be boosted up to 1560 MHz. It is a single-slot card so the NVIDIA RTX A4000 draws power from 1x 6-pin power connector, with power draw rated at 140 W maximum.

It is the most popular single-slot GPU for professionals because it offers twice the power as the A2000 with 16 GB GDDR6 and has 16 GB of GDDR6 memory with ECC (error-correction code) which is twice the memory of the previous generation.

The NVIDIA RTX A5000 is the most balanced workstation GPU offering the power, performance and computer capabilities, and ultra-high-resolution rendering. It has 24 GB GDDR6 with ECC (error-correction code) which delivers up to 71% greater throughput for rendering, ray tracing, and AI workloads than the previous generation.

It’s a double height board, with maximum power consumption that draws power from a 1x 8-pin power connector with a power draw rated at 230 W maximum. The board has four DisplayPort 1.4a ports. The card measures 267 mm in length, 112 mm in width, and features a dual-slot cooling solution.

The NVIDIA A5000 has similar supports to the A4000 but has two main differentiators. Firstly, the GPU memory can be expanded to 48 GB of combined GPU memory with NVIDIA NVLink by connecting two 24GB GPUs together. Secondly, it can deliver multiple high-performance virtual workstations instances that enable remote users to share information.

The NVIDIA RTX A6000 is the first pro desktop GPU to be based on NVIDIA’s Ampere architecture. It is also the first GPU to support PCIe Gen 4. It is the top of the range model that is aimed at high-end enterprise workstations.

It combines 84 second generation RT Cores, 336 third generation Tensor Cores and 10,752 CUDA® Cores. This dual slot 300W graphics card is designed for the most demanding visualization workflows with 48GB of memory and high-performance processing power. It is crafted to fit into a wide range of workstations.

The design of the GPU is minimal with a black finish. It has NVLink, a stereo and sync connectors that are all discretely hidden away behind panels to give it a clean finish. It delivers everything designers, architects, artists, and engineers need to meet today’s demands from their desktops.

WHAT CARD IS BEST FOR YOUR WORKFLOW?

Choosing which graphic card is best for you depends on your workflow use. Each GPU provides speed and performance and is compatible with many workstations that AMAX has to offer. We are experts at providing a wide range of solutions that can be tailored to your specification. The NVIDIA Ampere family offers excellent choices for upper and mid-range desktop workstations.